Photo - "Mini-me" standing on a "brag shelf" of previously published work. Everyone should have a mini-me! 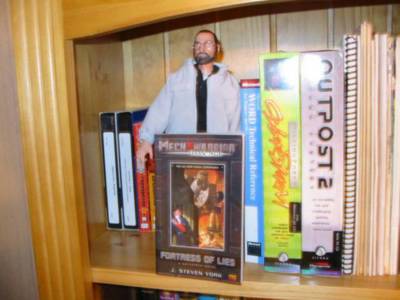 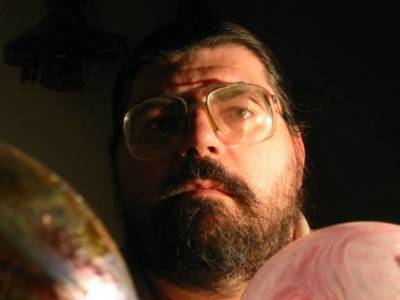 When they used to use this phrase in the old Marvel comics (usually to explain why an "inventory" story had been run rather than a part of the on-going storyline by the regular creators), I never really understood it. But "doom" is a pretty good word I think.

I'm just finishing the first book of my Stygian trilogy of novels set in the Conan universe, and I have TWO MORE to write by the end of January. There's nobody I can pass this off to, no way to stretch it (other books by other writers in the series are already late, probably eating up all the usual slack in the system). The pressure is on.

So, here it is, Thanksgiving morning. Early Thanksgiving morning, and I'm getting ready to go to work. I never get up early on Thanksgiving, but here I am. Later this afternoon, I'll go over to the house of my friends (and fellow writers) Dean Wesley Smith and Kristine Kathryn Rusch for turkey.

Cue music. Pull out magic sword. Stand on top of rock and hold it high.

I HAVE THE POWER!

Okay, this is insanity. I'm in deadline hell right now on my upcoming trilogy of Conan books. Why mess with a new blog?

Well, because I've been wanting to try the blog thing for a while now. I've got a web-page devoted primarily to my hobby interests (mainly my collection of GI Joes and other 1/6th action figures), but nothing to my writing and more diverse interests.

So, we'll see how this goes. I'm hoping that sitting down and typing in a quick blog entry will turn out to be "priming the pump" rather than cutting into my literary productivity. We shall see.

(Okay, learning curve on the blog thing. The spelling checker here doesn't know "Conan," and wants to turn it into "Cowman." Obviously, they're remembering the early Marvel comics, where Conan wore a fur hat with horns. No, I'm not making this up. More curious is that the spelling checker doesn't know the word "blog!" It would have happily turned it into "bloc," which is a whole different thing.)