I direct you to a very interesting blog post from Kevin J. Anderson (and also from Brian Herbert, with whom he has co-authored the new series of Dune novels) regarding the difficulties of writing in an established universe, particularity one created by a deceased author, and the unreasonable fan reactions it can provoke.
Posted by J. Steven York at 9:13 PM No comments: 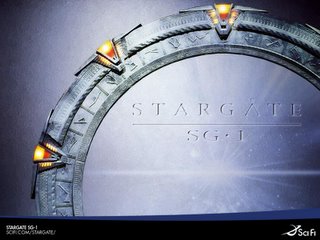 Hawkeye looks around. “I don’t hear anything.”

But then, a few seconds later, the distant sound of approaching rotor-blades can be heard.

The PA speakers crackle to life. “Attention! Incoming wounded,” an urgent voice warns, “all personnel report to the hospital!”

Millionaire Bruce Wayne hangs up the red phone in his private study.
His ward, Dick Grayson, who has been listening to the call watches him intently.

Wayne turns to his ward. “To the bat-poles, chum!”

On the bridge of the Starship Enterprise, Captain Picard gazes into the forward view-screen. “Mr. Data! Set course for starbase 113, warp-factor seven! Engage!”

In a flash of light, Doctor Sam Beckett finds himself finds himself in a strange time and place, in a body not his own. He takes a moment to realize how uncomfortable his new situation is, then mutters, “oh, boy.”

Facing unimaginable danger, a mild-mannered reporter for a major metropolitan newspaper steps into a store-room and emerges seconds later transformed into a dashing hero in flowing cape.

Facing unimaginable danger, a plucky boy named Billy stands tall and shouts to the heavens, “Shazam!” With a bolt of lightning, he is transformed into a towering adult hero in flowing cape.

Facing unimaginable danger, a mild-mannered prince draws a magic sword, holds it high, and shouts, “by the power of Greyskull!” With a bolt of lightning, he is transformed into a heroic warrior.

A non-nonsense man’s voice monotones, “It was Friday, 9:15AM, we were working the day-watch out of homicide. My partner’s name is Gannon. My name is Friday. I carry a badge.”

The man turns on the small tape-recorder. The reels spin. “Mr. Phelps, your mission, should you decide to accept it,” says a voice from the tape, which continues with a brief description of some threat to U.S. security. It ends with, “as always, in the event you or any of your IMF team are caught or killed, the secretary with disavow all knowledge of their actions. Good luck. This tape will self-destruct in five seconds.”

Facing overwhelming numbers, the Three Musketeers draw their swords. “All for one,” they cry in unison, “and one for all!”

Though they differ in many ways, all of the above are examples of dramatic ritual, a valuable and under-appreciated device used most often in serial fiction. It’s most often seen (especially in its most obvious form) in television and comics, but it can be used in prose fiction as well.

Dramatic rituals can be long or short, obvious or subtle, but they all represent some ritualistic element repeated in most every installment of the serial (sometimes more than once).

Many such rituals are so rigid that they carry little or no original information, and do little to directly advance the plot. Rather, they often are indicative of some sort of transition, of place, status, condition, or emotion.

This subject was suggested by a recent discussion I had about the television show, Stargate, SG-1. I bemoaned the fact that the writers have taken to increasingly shortcutting past several elements of the show that are classic examples of dramatic ritual. The two major ones that come to mind both involve the Stargate, an alien transportation device, a large ring that opens worm-holes, portals to distant world.

The first such Stargate ritual is the most elaborate, called “dialing the gate.” This is the process by which a set of coordinates is sent to the Stargate, opening an outgoing portal to another world. In this, technicians in a control room enter the coordinates through a computer program. The gate activates, and ring covered with symbols spins around the outside of the device. One by one, a series of “chevrons” around the ring locks into place, corresponding with a particular symbol on the ring. As each locks, a voice announces, “Chevron six encoded, chevron five encoded,” and so-on, until the last is encoded, and the gate opens in a fountain of liquid energy.

The second is when Earth’s Stargate address is dialed by a Stargate on another planet. In this, a warning klaxon sounds, lights flash, and a voice announces, “unscheduled off-world activation!” The station comes to high alert, and a protective iris closes over the gate as the wormhole forms. They will then listen for a “GDO” signal, indicating that the activation was by friendly forces, and that it’s safe to open the iris and allow the incoming travelers through.

I don’t think there’s any fan of this show whose blood doesn’t stir a little bit at the sound of the Stargate activating. It’s a programmed, Pavlovian response: Something interesting is about to happen, and something very dangerous could happen! Get ready!

Dramatic ritual can simply be words, or a series of actions. Often, it also incorporates musical themes or sounds effects. In prose, it can include repeated descriptions or language.

The use of ritual is probably as old as human tribalism. It’s a way of unifying individuals in purpose and intent. It’s a way of encouraging loyalty, faithfulness, and patriotism. It’s why we have oaths, pledges, and prayers, and why we value those things so highly. It’s not surprising that writers have long included ritual in their story-telling.

What a wonderful dramatic tool! By merely invoking the words and actions of the ritual, little more than a cut-and-paste operation, the writer can engage and excite the reader (or viewer). They can, in a single stroke, emotionally prime them to be ready for action, romance, danger, suspense, or even humor.

Given the power of such ritual devices, and the wonderful ones available to the Stargate writers, why would they turn their back on them? There are, I think, many reasons.

It is the nature of working on most kinds of serial fiction that the creators often tire of their subject matter much faster than the audience. This is a consequence that creators spend much more time with the material than the audience, and over uninterrupted periods of time. The nature of television only makes this worse. If we hear, “chevron six encoded,” once in an episode, the writers may have seen it in a half-dozen script drafts, and it was probably rehearsed, filmed, and re-recorded many dozens of times.

It’s also the nature of serial fiction that, while the creators may be exposed to each and every installment of their creation, most of their audience will not. Those that do are the most fanatical, and perhaps the most likely to appreciate and value the rituals that the creators hold in low regard.

So, the simplest answer is that the Stargate creators are just sick and tired of the blasted gate, and want to get on with the story.

I suspect that use of rituals also runs counter to some writer's work ethic. Using them feels like a cheat, or a short-cut. If it isn't hard, it isn't good.

Another explanation is that the rituals simply take too much time. The Sequence by-which the Stargate is dialed is particularly long, having been developed for a feature film where it was only used once. Since then, StarGate has evolved from a pay-cable series to a series on a cable network infamous for the number of commercial minutes they wedge into an “hour” episode.

A writer working in such an environment has got consider every minute of screen-time precious. As I said before, rituals often do little to actually convey information or advance the plot. The temptation, then, is to edit them out first when time is short. In fact, it may be tempting to edit them out, even if time isn’t, to wedge in something else that the writers consider more interesting.

Yet, while I understand these things, I think it’s a mistake for the creators of this show (or any serial, dramatic or print) to completely eliminate their signature rituals, or to think of them as less than desirable elements of their fiction. While some minimizing can be forgiven, the rituals should be revisited in full on regular occasions (the dramatic equivalent of going to church or temple only on holy days, rather than not at all) to keep their power intact.
What else can we learn from all this?

1. That rituals have both power and utility to writers of serial fiction. They’re worthy additions to your creative toolbox. They aren't cheats. They're devices, and like any, they can be used or abused, done poorly, or well.

2. That rituals must be maintained and repeated to keep their power, and that once established, they should only be eliminated with good reason. That the creator is tired of them is rarely a good reason. It is more important to ask, is the audience tired of them? If so, then they need to be removed or reduced immediately, but not before.

3. That in creating dramatic rituals, it’s important to realize that you may have to live with them for a long time. Consider not only their potential power and effect on the audience, but how they will hold up under repetition. Will they ultimately prove to be a useful dramatic punctuation, or a story-speed-bump? A good rule of thumb is that brevity is a virtue.

Yet, even length can have it's virtues. Though that Stargate dialing sequence can seem to take forever, it also serves to build suspence and anticipation the longer it goes on.

And that’s all I have to say about that. I’m out of here.