He was a good cat 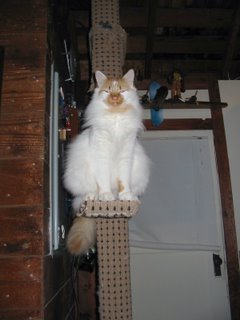 It was a very sad weekend here. Our cat Banzai passed away early Sunday morning after a long illness.

Just before Christmas he stopped eating on his own, and steadily became thinner and weaker. The vet diagnosed him with liver problems, and we put him through a series of antibiotics and drugs designed to stimulate his appetite.

Nothing worked. He fought the medication, and we had to feed him by baby bottle (much to his annoyance) every day for those last six weeks. Fortunately, he never seemed to suffer. He enjoyed being petting and brushed right up to the last day, and wasn't reclusive at the end as many cats are. He died peacefully at home, with us there at the end. That's not much but it's something.

They say cats have nine lives, and Banzai has probably been through several of them since we've had him.

I found him on our door-sill in December just over three years ago. It was night, the middle of a raging storm. The wind was blowing 40-50 mph, and our screen door had broken loose and was slamming open and closed right next to him, hard enough to kill him if it hit him. He was just a kitten, abandoned by mom, or dumped, I don't know. We'd seen him around yard in the couple of weeks before, and assumed he belonged to a neighbor and that his mom was somewhere near, but that apparently wasn't the case. Apparently he had been living in our crawl-space, where a repairman had spotted him a few days before.

I was home alone, watching TV, when I heard head his cries from outside, barely audible over the howling of the wind. At first I thought I imagined it, but I went and carefully opened the door, and he walked inside.

The problem was, I didn't see how I could keep him, or even allow him in the house. We had just adopted a new cat (another rescue from across town), and only a few months earlier we'd lost another cat, "the Dude" to Feline leukemia. She'd (yes, "the Dude" was a she, long story). She also had been a neighborhood rescue, and unknown to us, had been sick when we adopted her, so we knew that the disease was out there, and had just been through the pain of watching her die. I couldn't bear risking Oz if he was sick, and at this point, Oz hadn't been tested either, so it was even possible he could give it to the new kitten.

So, with nothing else to do, I took the kitten back to the back of the house and put him in the crawlspace, where I knew he'd been before, and where he'd be safe from the storm. I had barely walked back to the front of the house when I heard him outside again! He'd run completely around the house and had beat me to the door!

At that point, I had to do something. He was going to die, from exposure or that loose door if I didn't do anything quick. I finally relented, and put him in our sun-porch, which was unheated, but at least dry and tried to make him safe and comfortable. The next day I went door to door looking for his owners, but while many people had seen him around, nobody claimed him. Both cats went to the vet (separately) for testing and shots, and when they were both pronounced healthy, Banzai came into our life for the duration, short though it turned out to be.

"Healthy" was always a relative term with Banzai. I know he was malnourished as a kitten, and I suspect his mother was as well. He was clumsy, had poor circulation in his back legs, and seemed to have no "full" switch when it came to food. We called him "the belly that walks," and his long, silky, hair only made him look bigger.

He was a happy little Buddha of a cat, playful, loving, and always getting into some kind of trouble. He and Oz were like brothers: playmates, friends, and rivals all at once. They'd wrestle constantly, steal each other's food dishes, and argue without really fighting (most times!). Oz would groom Banzai, and it would inevitably lead to a wrestling match at some point. Their personalities couldn't have been more different, but they complimented each-other perfectly. They were a great team.

This wasn't his first serious illness either. He had another bout of the same thing about a year ago (mistaken by another vet) and when we'd written him off as dead, rallied and made a full recovery. It gave us hope that he'd do it again, but that wasn't to be.

They say cat's have nine lives, and maybe Banzai used up a bunch of his before he showed up on our doorstep. That certainly seems possible.

But I have another theory about cats. Maybe they have a fixed allocation of stories, and Banzai used his up at an astounding rate. There was the time he got locked in the pantry over-night, and happily ate a tunnel through an unopened 25 pound bag of Science Diet cat food. I came into the kitchen the next morning to see a fan of cat-food spreading out under the pantry door. I opened it, and Banzai happily waddled out as though it had been the best night he'd ever had.

There was the time he got hold of a ball of yarn and proceeded to weave it into a 3D sculpture that stretched from one end of our house to another and across both floors.

There was the time his fixation with yarn lead him to climb under the eaves of the attic, find sealed boxes of the stuff, and rip holes in the side so he could spread it all over Chris' office.

There were the many times he raided Chris' lingerie drawers (he loved those soft and frilly things, go figure) and left various garments in interesting places. We jokingly called him the "cross-dressing kitty."

There was his (possibly related) obsession with pink feathers and fur (they say cats care color-blind, but this cat could definitely tell pink when he saw it). He once plotted for days to steal a teddy bear with a pink boa from a high shelf, and he loved to steal Chris' joke "romance writer pen," a pink ball-point with feathers on top. We finally just learned that anything with pink fur or feathers was either locked in a cabinet, or it was a cat toy.

There was the way he climbed down the cat-ladder in the picture. It's 8 feet tall, and connects Chris' attic office with my office down in the converted garage. Never graceful, Banzai would reach down, hook his front claws, and then swing his butt down to the next platform like a climbing monkey. He couldn't jump very well, but if he could hook his claws in, he could climb paw-over-paw like nobody's business, and he was completely without fear.

He was always skittish and jumpy (probably because of the trauma of the storm), but he quickly warmed to house-guests, and never knew anyone who wasn't a friend. Many an over-night guest would wake up to find Banzai sleeping on them. He liked to sleep on my chest when he could, or he'd come up and perch on my arm when I was sleeping on my side. I had a recurring dream that I was Snoopy's dog-house!

He also loved to sit on heating registers when the furnace was on, and late at night you could hear him plop down and seal off the duct in our bedroom like a cork in a bottle. We could freeze, but Banzai would be toasty.

Banzai was an inside cat, and would never go near an open door again, but our other cat, Oz is an escape artist. Several times he's gotten out and vanished over-night. But every time it happened, even for a few minutes, Banzai would punish him for it. For days, Oz was no longer the Alpha kitty. Normally easy-going Banzai would growl at him, swat him, and steal his food, so that Oz would know he'd done a bad thing. Oz never learned, of course, but Banzai never gave up trying.

Now everywhere I look in the house, every thing I look at, it seems like there's a Banzai story to go with it, some funny anecdote, some funny sound he used to make, some funny thing he used to do. Even while were we were morning him Saturday night he was making Chris and I laugh through our tears as we shared our memories.

Our friends (and fellow writers) Dean Wesley Smith and Kristine Kathryn Rusch came over at 3AM to comfort us and help us bury Banzai. You simply can't get better friends than that.

Banzai is in the front yard now, under some bricks by the front fence, where Oz I and I can see him from my office window, and just maybe he can keep an eye on us.

I'm going to miss him terribly. For a guy who writes war, barbarians, death and destruction, I'm a terrible softy for animals. They become very important in my life, and it hurts me deeply when they're finally gone.

But I remember them. They tell me their stories, and I write them down.

Goodbye Banzai. You were a good cat. You still are.
Posted by J. Steven York at 7:26 AM 1 comment: