I've just opened my latest attempt at viral marketing for beta-test. It's a blog devoted to photo-toons featuring the Minions, generic stooges of the type who populate every super-villain installation, from Goldfinger's estate, to Dr. Doom's castle, to the Death Star. You know the type: interchangeable. Expendable. Not too bright.

These are their stories, as dramatized by 1/6th scale action figures.

Okay, maybe it's less an attempt at viral marketing than an excuse to play with my collection of action figures, but you never know. Though I'm still filing off the rough edges, please feel free to pass the link along to anyone you think might enjoy Minions.

http://minions-for-hire.blogspot.com/
Posted by J. Steven York at 2:58 AM No comments:

Farewell to a rocket man 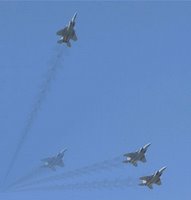 I feel compelled to comment on the passing of former test pilot Scott Crossfield recently.

Though Crossfield was far less well known than some of his contemporaries, such as Chuck Yeager, his contributions to aviation and space flight were significant. He was the first person to break Mach 2, and one of twelve people ever to fly the amazing X-15 rocket plane.

Though not-much-remembered these days, the X-15 was one of the most exciting and significant programs in both aviation and space history. It was the first winged, reusable spacecraft (it flew many sub-orbital space flights), and by most measures, was also the fastest manned aircraft ever built. As a research aircraft, it pioneered many techniques and technologies still in use today.

But the X-15 program was a risky one. Crossfield cheated death in the X-15 at least twice. Once, when a rocket engine exploded in a ground test while Crossfield was sitting in the cockpit of the aircraft. And again when Crossfield's X-15 suffered an engine failure shortly after being dropped from it's B-52 mothership. The X-15 was designed to land with its tanks empty, and though Crossfield dumped fuel on the way down, the craft still touched down dangerously overweight. When the nose-wheel touched down, the X-15's back broke, nearly snapping it in half. Crossfield walked away, and the X-15 was salvaged, rebuilt, and flew again.

After retiring, Crossfield remained active in aviation and space, as an advisor, consultant, and industry executive. Though in his 80s, he continued to fly as a private pilot, and was killed when his plane crashed during a routine flight, possibly the victim of bad weather.

Some would say that Crossfield's amazing reserves of luck (and skill) had finally run, out, but perhaps not. Some people just weren't meant to die in bed.

I salute one of aviation's pioneers.
Posted by J. Steven York at 1:09 PM No comments: