The Darwinism of the Wind 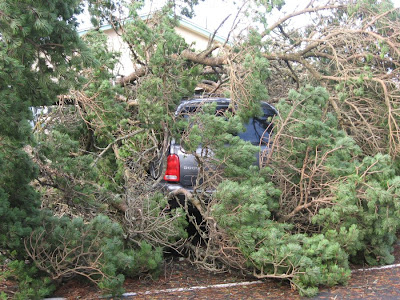 Well, the worst storm in at least 20 years here on the Oregon coast is gone. The power came back on last night, and we have phones again (though with limited service) and internet. It's really nice to be back in the 21st century. Really nice.

Here we got some rain, but the brunt of the damage came from wind. Gusts, depending on who you listen to, were either as high as 125 or 129MPH. I think 125 is the official number. We're the lucky ones. Just north of us they got the rain, often 10-12 inches in just a few hours. You can resist the wind, but when water is determined, there's no stopping it. Those people have been devastated. 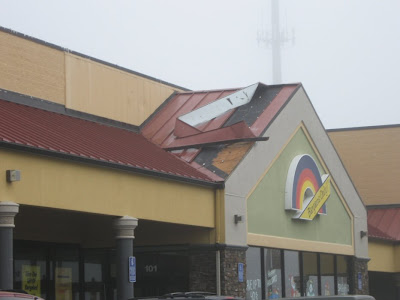 I drove around town this morning with camera at hand. I was surprised to see how quickly repairs and clean-up were progressing. A destroyed billboard had already been cleaned up. As you can see in the pictures, the gaping hole in the side of the local Casino was already being patched. Chain-saws, bucket lifts, and service trucks were everywhere. 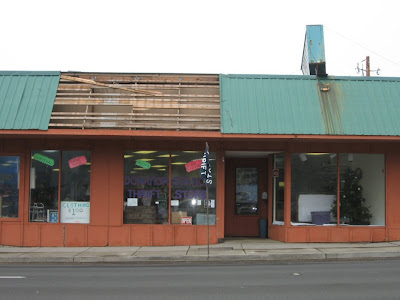 Another thing that surprised me, given the extreme winds, wash how little real damage I could find. There were plenty of trees down, many ripped up by the roots or snapped off at the base. But very few structures were significantly damaged. There were a few broken windows from flying debris, lots of damaged roofs, and a few freakish things like the damaged wall at the Casino (and in that case I have to wonder if it was already weakened somehow, possibly by water leaking inside the wall). 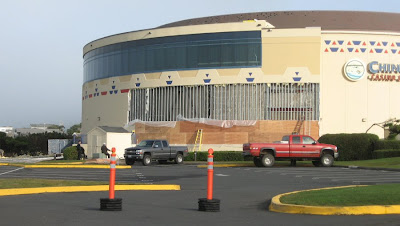 There was lots of damage to signs, of course. It seemed like half the business signs in town were down or seriously damaged. But for the most part, unless they happened to be in the path of a falling tree (none of the ones I saw were, but I did hear of this happening) there was very little visible structural damage. 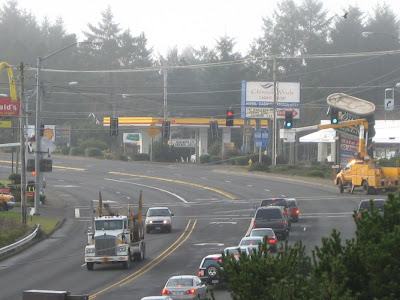 In most any other town, winds like these would have flattened the place, but it didn't happen here. The reason, is the Darwinism of the wind. We have storms here every winter. Locals really don't even pay any notice to the wind if it's under 60MPH. Below that, it's more an annoyance (blown-away trash cans, flattened winter flowers in the garden, and a few power outages) than a real threat.

For the most part, things that could be flattened by the wind were long ago flattened. Anything that could be blown away is long gone. The exceptions are, as mentioned, trees and signs, both of which tend to grown and age until the right gust of wind catches them and snaps them off.

Roof's age too, so damage there is inevitable, but usually not serious. By necessity, things are built strong here. My house has been standing up to these winds, three blocks off the beach and on top of a hill, for over fifty years. With luck, it will stand fifty more. 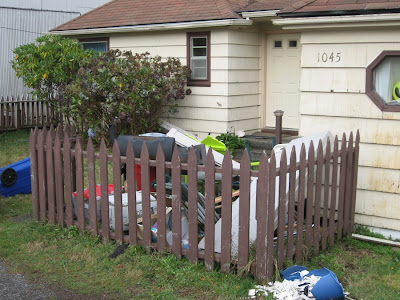 Thing is, when things fail here, they tend to fail catastrophically, especially in a storm as strong as this one. The Casino wall seen in previous pictures is a classic example of that. Somehow the wind got under the outer wall, and peeled that big building like a grape.

A less spectacular example is our big loss to the storm, a storage shed we bought last year. Yes there is (or used to be) a shed in this picture. Mostly what is left is the floor, some of the heavier contents, and a couple corner panels that remain attached. It was one of those pre-fab plastic jobs. It was surprisingly strong. I've never seen it move in our strongest winds before, and I watched it closely to be sure. But it just wasn't ready for triple-digit speeds. About midnight Sunday I saw that one of the side panels had popped out.

Chris and I ran out in a lull and moved the most vulnerable contents inside. But it was too late for the shed itself, as the most powerful part of the storm was still to hit, and with a hole in its side the wind could get under the roof, turning it into a sail. I knew the roof would go, it was only a matter of when. When the big gusts came, one of them lifted the roof off in one piece and deposited it in our front yard. The rest of the shed walls started to rapidly self-disassemble. 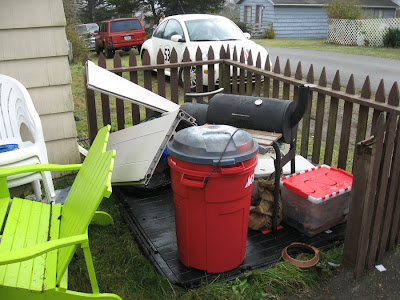 We ran out in heavy rain and wind (probably 70-80 gusts instead of 100) to grab the roof and drag it into a sheltered alley between two houses, so it didn't blow into someone's house or car and do more damage. We were lucky it didn't turn into a parasail and take both of us away, but we were successful.

Not happy for us, but looking around at people who lost homes or cars or even roofs, we were pretty lucky. We even managed to salvage all the pieces of the shed. I'll have to examine the parts carefully for damage, but it might even be possible to rebuild it. If we do, I'll be modifying it with all sorts of reinforcing straps and bolts to make it stronger. Worth a try anyway.

Because this is the coast, where only the strong survive.

(Update to this post: 12/07/07 When I took the picture of the Grocery Outlet store seen in the second picture, I thought the damage was only superficial loss of roofing on the facade. Turns out I should have looked through the windows. Water built up on the roof and caused a large part of the store's ceiling to collapse. As I said, when things happen, they tend to be catastrophic. The store has never suffered any noticeable storm damage in all the years I've lived here. Anyway, the store is now closed for major repairs with no word on when it will reopen.)
Posted by J. Steven York at 10:54 PM No comments:

We've just weathered the worst storm we've ever seen here on the Oregon coast. 129mph gusts reported here in our little town. Our house is okay, but our storage shed self-disassembled. Damaged and downed trees all over town. Roads blocked. No power, phones, or internet. I drove 30 miles to a coffee-shop where I could blog this quickly. Here are some pictures of local damage and some downed power lines around the corner from the house. No word when we'll get power or phones yet. The main lines into the city are down, and we don't know for sure even where the breaks are. 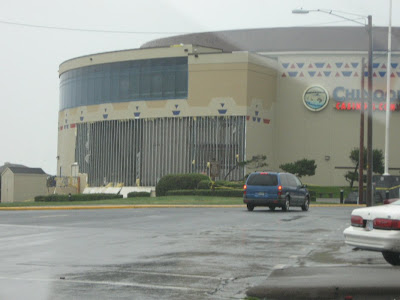 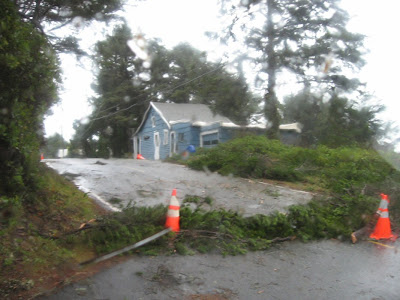 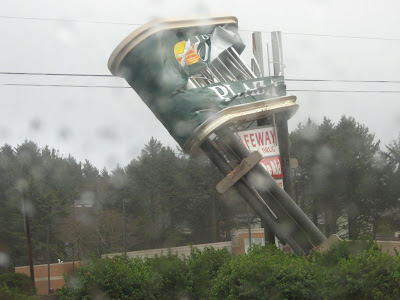