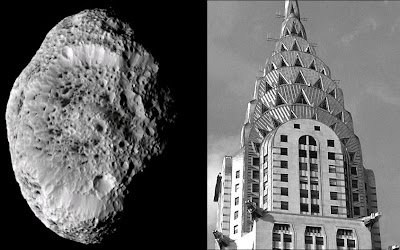 NASA has just released some exciting new images taken by the Cassini space probe of Saturn's moon Hyperion. As many fantastic moons as we've seen in the Jupiter and Saturn systems, they continue to offer visual surprises.

Hyperion, as it turns out, is an icy sponge of a moon blasted with craters and impact damage. But it's my understanding that the most striking visual feature comes not from impact, but from melting. Scientists believe that dark material on the surface of the moon is heated by the sun, thus causing it to melt its way into the surface. What makes this moon look so strange is that it's too small to be pulled into a spherical shape, and so "down" as defined by gravity isn't what our common sense tells it should be.

Our lifetime of experience on Earth tells us that "up" is usually at right angles from the ground. There are exceptions, of course, but then we're usually standing on a hill, mountain, or slope deviating from the surrounding terrain, and under sky, both of which usually allow us to define "flat," which is in turn 90 degrees from "up" and "down"

Not so on Hyperion, where "down" is going to point pretty much towards the center of mass. So dark objects melting into the ice near the ends of its oblong shape will travel "down" at a sharp angle to its surface. This is the first time I can think of that we've seen this so vividly illustrated.

You can think of Hyperion as two hills joined bottom to bottom. While those arches of flat planes at either end look to be relatively flat to the surface, I suspect to an astronaut standing on the surface they would appear to be steeply sloping upwards towards the ends of the moon, and from an observer out in space (like Cassini) the astronaut would appear to be standing at an angle.

Yet another example about how "common sense" may not serve us well once we move beyond the environment we evolved in.

But I was also struck with how the image reminded me of something more familiar, New York's famous Chrysler buildings (in my opinion, one of the most beautiful pieces of design in the 20th century).

It's impossible to know what architect William Van Alen was thinking when he designed the arches of that famous spire. Could some part of his mind been imaging how a building so massive, so magnificent, so lofty, would actually defy the Earth itself? Could he have have envisioned a building that, so attracted only by its own gravity, its upper reaches would be drawn towards the center of its own, mighty, mass?

Okay, that's probably not what he was thinking, but it's a nice dream. I think I'll keep it.
Posted by J. Steven York at 7:29 PM No comments: