The other day NASA took a mock up of the new Constellation manned capsule to the Washington mall to show it off, and I studied the press images with interest. I'd seen a rather less detailed mock-up recently at the NASA visitor's center at the Kennedy Space Center, but this gave a much better sense of what the real item will be like, and the fact that it was sitting on a flat-bed truck provided an unusually good reference for scale.

I was at once stuck by how large it is, and how small. Certainly, it's big compared to the Apollo capsule that the reentry body is based on, and big enough to provide a "wide load" for the semi-truck. But it's still very small when you think of some of the tasks put before it.

Constellation will replace the shuttle in taking astronauts to orbit, and hopefully will eventually get us back to the Moon. But long-term plans are also to use it for for extended missions to Mars, or possibly to near-Earth asteroids. Such missions would require astronauts to live in the capsule for many weeks or months. Even Constellation lunar missions may have much more extended stays than the longest Apollo mission. For a Mars mission in particular, the Constellation looks tiny.

It's one thing to be crammed into a tight space with several other people for a week or two. Human beings can endure almost anything for that length of time. But when this stretches to months or even years the psychological stresses can be intense. Boredom, isolation, lack of privacy, all are concerns on long duration flights, even in much roomier environments like the International Space Station. 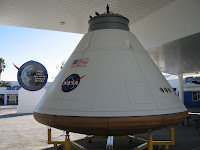 Several years back I had the pleasure of watching the IMAX film, "Mission to Mir." One of the great things about IMAX is the level of visual detail, and the sense of presence that it gives you. You're free to ignore the action at the center of the screen and study the dusty corners of whatever environment is being filmed.

This was of special interest here, as Mir was quite an old space station at that point, and it was anything but a sterile environment. It was literally a house, or maybe more properly, a dorm, in space, and it showed. Objects showed obvious signs of wear and use. Everywhere you saw signs of human occupation: notes, pictures, personal objects, signs.

Given the eventual sad decline and death of Mir, this could be taken as signs of decay, but my reaction to it was joyful. People weren't just visiting space, they were living there! It was an important distinction from the space missions of my youth. Even the Skylab space station missions seemed mostly to have been carried out with a sense of military pragmatism.

One scene I found of special interest featured a visiting astronaut showing off their tiny personal quarters. In particular my eyes were drawn to a small shelf full of well-worn, well-loved paperback books (held in place with some kind of strap or bar, in case you were wondering). The 'naut explained how every new visitor added to the library, and left the books behind for future occupants of the station.

Since every pound of mass sent to orbit is literally worth its weight in gold, these are probably some of the most expensive books I've ever laid eyes on, and they were likely among the most appreciated.

Which brings me back to the Constellation. The astronauts who go on those long missions will almost definitely have one advantage no previous space-traveler has had before: a space-rated version of the Kindle or some similar ebook device loaded with an entire library of books.

Yes, they'll have other entertainment technological advantages as well. They'll certainly have an iPod, or something like it, loaded with music and movies. There will be personal computers, possibly game consoles, and maybe even simple virtual reality to help them escape their little technological world from time-to-time.

But I think books have a unique power to engage the mind and take the reader away from whatever their reality may be to a different mental place. I think books will be a great source of comfort in the long void between the worlds. It makes the ordeal of spending months on end jammed into that little tin can seem just a little more thinkable.
Posted by J. Steven York at 11:35 AM No comments: