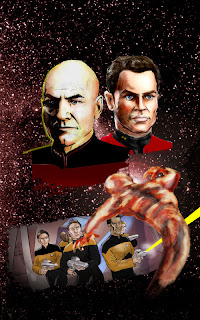 You see here (click on the image for a larger version) the just-approved "cover" art for our (a collaboration between my wife Chris and I) upcoming Star Trek the Next Generation ebook. It's part of a 5-book series that focuses on the "lost" year on the Enterprise-E between the end of the movie "Star Trek Generations" (where the Enterprise-D is destroyed) and "First Contact" (when the Big-E is just finishing its official shakedown period). Our book deals with the infiltration of E by a Changeling spy as they explore a dangerous planetary nebula, and features a lot of character development on Lt. Hawk, a helmsman who appeared in "Generations" and "First Contact," and who is one of the few established gay characters in the Trek universe.

If you're curious, the rest of the covers in the series can be on our editor Keith R.A. Decandido's blog here. 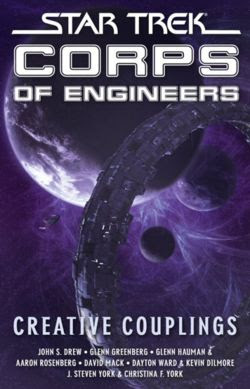 By the way, I don't know if I've already posted this cover, but another Trek project (previously released as an ebook) will finally hit print in trade-paperback later this, year. "Star Trek Corps of Engineers: Creative Couplings" includes our ebook "Spin." Spin is a harder-than-usual science-fiction first-contact story inspired in part by my love of the works of such old-school sf writers as Hal Clement and James White.

In the book, the SCE must deal with a derelict alien spacecraft on a collision-course with an alien planet. The ship is a rapidly spinning ring with very high artificial gravity at the rim, a bunch of very alien corpses on-board, and no inner hub or structure to provide logical access to or from the interior. And in this case, neither the ship, nor the planet it is endangering, are what they seem.

I'm pretty pleased with this one. Check it out.
Posted by J. Steven York at 6:24 PM No comments: