Sprinkles, Frosting, and a Twist: Taking Fictional Tropes Beyond the Next Level 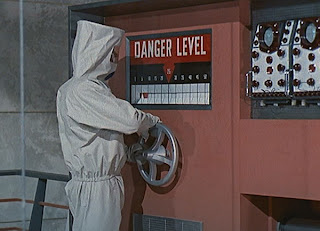 A few months ago, my wife Chris was taking a badly needed break between writing books on a tight deadline. All she wanted was to veg out in front of the TV for a while. Unfortunately, it was somewhere in the Holiday/new-year wasteland of TV. All of the shows we follow were either off the air or in repeats.

As it happened, I had just then stumbled on a deal at a liquidator store on an anniversary release of James Bond DVDs. I brought a couple home, and Chris spotted them. Before we knew what we were doing, it was back to the store for more Bond DVDs. All the Bond DVDs in fact (except for the two most recent "reboot" films, which we already had).

We ended up spending the entire holiday break on a Bond marathon, watching not only the films, but many of the bonus documentaries, which this release generously provided. I don't consider it wasted time at all. Quite the contrary, it was quite educational.

The classic Bond films aren't just films, they're grand entertainments, joyously excessive in every way. They're clearly born of the pulp magazine tradition of storytelling: fast moving, exotic, suspenseful, action packed, engines for over-stimulation. But of course, the pulps only described the things that James Bond movies brought to life.

I don't think the younger generations can appreciate a world-changing experience it was for audiences seeing "Goldfinger" or "Thunderball" for the first time. It did what "The Great Train Robbery" or "King Kong" did for the generations before, or what "Star Wars" or "The Matrix" did for later generations.

But of course, Chris I don't make films, or even write screenplays these days, so what's to be learned here for prose writers? Well, one thing we learned was the power of taking fictional tropes to the next level, to not just have things happen in your stories, but to have them happen with pizazz and style. In any kind of fiction, not just adventure, it could be the difference between bland story that just sits there, and exciting fiction that engages the reader and won't let go.

Here's how Chris and I came to call this, "Frosting, Sprinkles, and a Twist."

We were watching a typical Bond action sequence, I don't remember which one. I remarked to Chris, glancing at the plate of holiday sugar cookies looking for a metaphor, "You know the thing about Bond. It isn't just about viewer cookies ("cookies" in this instance, referring to those story elements placed to offer special pleasure to the audience). They all have frosting."

At which point the scene immediately topped itself. I did a double-take, and struggling to adjust, said, "Okay, frosting and sprinkles."

At which point, the scene again managed to top itself, taking to outrageous to an unbelievable level. Chris looked at me and grinned, "Frosting, sprinkles, and a twist!"

The pattern was revealed, and once we recognized it, we saw it again and again. Like I said, I don't remember that first scene where we spotted the pattern, but I do remember one that came immediately after, a chase scene in "Live and Let Die" which repeated the pattern twice in quick order.

In the scene, Bond and the inevitable lovely companion are being chased by bad guys. That's the cookie, and it's the sort of thing that could (and usually does) happen in any adventure or suspense story. It could be pretty exciting, except for the fact, we've seen it a million times before.

But this being a Bond film, we don't leave it there. They're on foot, so Bond steals a handy motor vehicle to make an escape. Frosting? Maybe, but weak, thin frosting. We've seen it all before.

Which is why Bond steals a bus. That's frosting.

The bad guys also make motorized pursuit, some on motorcycles, which some might consider a twist. A bus chased by guys on motorcycles with guns. Pretty exciting.

But not enough for a Bond film. Chased by the motorcycles, Bond cranks the bus steering wheel and puts the top heavy thing through a 360 degree spin, driving the motorcycles off the road. Not only a great twist, but a literal one!

But the scene isn't over, and there's time to run through the cycle again.

Though Bond has gotten rid of the motorcycles, there's still a car back there, and the way is blocked by a low bridge! That's a pretty darned good cookie, and many a writer would be willing to stop there. But this is a Bond film.

Bond keeps driving! The bus hits the bridge, and the entire top deck of the bus sheers off and falls to the ground, blocking the car's path, allowing Bond to escape. Excellent frosting! One could well be satisfied with such a cookie and such frosting.

But this is a Bond film, dammit! The pursuing car crashes into the upper deck of the bus, gets stuck under it, and the car and severed roof drive away blindly! Action sprinkles with humor added!

But that isn't quite enough. As I said, it's driving blind, so the car (still under the bus roof) veers off the road and crashes into a lake. A light but refreshing twist to finish off the scene.

Frosting, sprinkles, and a twist. It's a classic "rule of threes." There are several examples of this sort of thing in storytelling. For example, there's the classic structure for a short-story:

Character in a setting with a problem. Character tries to solve problem. Fails. Things get worse.

It's also used in humor, from fiction to stand up.

Set up the joke. Reinforce the setup. Break the setup with the punch line. (Bad example. Man tells doctor, "Doc, my father thinks he's a chicken." "Oh, that's terrible. But don't worry, I've dealt with cases like this before, so I'm sure we can cure him." "Oh, I can't have you doing that, doc! We need the eggs!")

In one of documentaries, the son of original Bond producer Harry Saltzman quotes him as saying, - "(I'm) thinking about another way to die. Death is really quick. A bullet to the brain, you're dead. But what I've got to do is think of something glamorous. You've got to die Hollywood style. It's got to look beautiful, it's got to look graphic, and it's got to give the audience a sense of revenge."

Exactly. Why use a gun when a poison blow gun would work? Why have the hero duck the dart when he can use his murderous dance partner for a human shield?

Of course, you could say, "What a stupid bad-guy. A gun would be better, and with a steel jacketed round, that human-shield trick wouldn't work at all."

But that's the real secret of "Frosting, sprinkles, and a twist." The viewer (or reader) can figure this out just as easily as you. But if you've entertained them, surprised them, stimulated them, titillated them, they don't care! In fact, they'll move right past it and want more. In fact, if you're good (as in the chase scene described above) you've got another helping lined up before they even have time to want more.

Of course, you may be saying to yourself, "this doesn't apply to me. I don't write James Bond, or action, or thrillers. I write romance (for example)!

No, it still applies. Sure, the tropes you use may not be as broad, but there's still no reason you can't take them up a level. Or two. Or three.

Maybe in your romance, the scene where your ugly-duckling, small-town heroine meets the potential mother-in-law just lays there. But what if the mom is brilliant and beautiful? And is soon revealed to be a jet pilot. And, oh-yeah, a retired astronaut. It all piles on to grind all your heroine's worst insecurities into the dirt.

Maybe the break-up scene at the corner coffee-shop is strictly by the numbers. What if instead you put your characters on a roller-coaster at Coney Island? And one of them says "I think we should see other people" just as the train tops the first hill and takes the plunge. But the roller coaster malfunctions, and they end up stuck together, in uncomfortable silence, with hundreds of people looking on from the station platform only 30 feet away.

Romance, mystery, science-fiction, it doesn't matter. If the story needs something, just take the elements that are already there, the settings, the characters, the situations, and take them up a notch -- two -- three.

Just remember, when in doubt, ask yourself, "what would James Bond do?"
Posted by J. Steven York at 2:55 PM