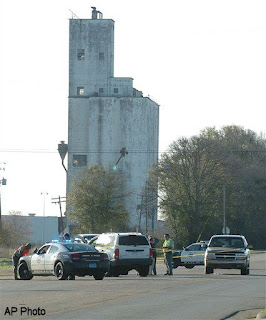 You know how sometimes you'll turn on the radio or the TV with the news already in progress, and you get this bit out of context that really doesn't register till later, if at all?

It started like that for me. I turned on the car and the radio came on, and I was focused on backing out of a parking space. I'm not listening, but a few words call out to my unconscious. I hear "shooting," "gunman," "Alabama," and that bit before "Alabama." Was it "south-east?"

Though I live on the Oregon coast now, I was born in south-east Alabama, and spent most of my childhood there. Though we moved a lot later on, my folks always had a house there, my mother's family lived there, and it was always "home" no-matter where we lived. It's poor country, sparsely populated, and generally speaking, not much happens there. When something from from there makes the national news, I pay attention.

But in this case, I was quickly out of the car and distracted by something else. It wasn't until that evening that I checked into Google News and saw the headlines, and dug into the reports with increasing alarm. This was all familiar territory. All the pictures showed familiar places. This was hitting close to home. Very close indeed.

I knew intimately almost every inch of the gunman's rampage, and had history with it all, and it had ended shocking close to the house I grew up in.

After fretting for a few minutes about the late hour, I called my Brother who still lives a half-mile or so from my parent's house in Chancellor, Alabama. My parents are snowbirding in Gulf Shores, but I couldn't be sure where he'd been that day. His first words on answering the phone weren't "hello," or "who is this?" They were, "I'm alive."

Yes. That was the answer I was looking for. Death had come to southeast Alabama, trod through my memories with an assault rifle in-hand, and come perilously close to people I love.

It had been worse for Tim. He'd been 3o or so miles away, in Dothan, Alabama, when he heard about the incident on the radio, but his girlfriend had been home. The news reports said only that the gunman had been cornered "on highway 27 between Geneva and Enterprise," which is exactly how you'd describe Chancellor if anyone asked.

I make that phone call sound grim. Actually we laughed and joked through most of it. Gallows humor. Whistling in the dark. A defense mechanism. We're good at it.

We didn't talk long. It was late on a work night. But it didn't stop me from thinking about it.

The part of the shooting spree I'm least familiar with is where it started, in a tiny town called Kinston. Yet Kinston lies along probably the first road I ever traveled. Kinston is on the road between Opp and Samson. I was born in a hospital in Opp, and that road is the one my parents would naturally have taken driving me home.

Michael McLendon started his rampage there by killing his mother and her dogs and setting her house on fire. Talk about someone feeling walking on your grave? This is the exact opposite. It's like death walking on your birthplace.

He then proceeded to the tiny town of Samson, one I know very well. I never spent a lot of time in Samson. There was no reason to.

The downtown is just a few blocks long. But it was a place you went through on the way to somewhere else. We usually passed through on our way to the beaches in Florida, so I associate it mostly with happy time. We stopped there to eat a couple times, or for gas. But unless you have business or family in Samson, there isn't much there, there.

My dad got us in a fender bender there once when I was a kid (just to be clear, it was the other guy turned right from the left lane, and it was definately his fault), and that's probably the most time I've spent in the town, sitting there while waiting for the police, trading insurance information, filling out accident reports.

In a town of less than two-thousand people. Five of them on one block of Pullum Street.

I can't get over that.

I looked Pullum Street up on Google Earth. Near as I can tell, it's only a few blocks long. My Uncle Wayne had an apartment very close to there until he passed away a couple years ago, maybe no more than a block or two away. Though I don't know Samson that well, I could drive you there without a map.

From Samson, he drove the road to Geneva, another one I know well. If you were coming home from Florida and needed to pick up some groceries or stop for a bite to eat, you'd probably detour over to Geneva rather than taking the direct route through Coffee Springs (a few miles from Samson, where I attended school until the sixth grade).

Just outside of Geneva, there's a grain silo. It's visible in many of the news photos. It's been a landmark as far back as I can remember. It was once the tallest thing for miles in relatively flat country. There are some new water towers and radio masts, but it's still one of the tallest things in the area. Seeing the grain silo in the distance, as you were driving highway 27 from Chancellor, was the first sign that you were approaching Geneva. Though the silo was on a different road, it could be seen from miles away.

The police set up a road block in front of the silo, on the Samson-Geneva road, and tried to stop the gunman. They failed, though they succeeded it slowing him down. Two policemen were injured, and according to some reports he shot at people in the Wal-Mart and Piggly Wiggly grocery-store parking lots nearby, both places I've shopped while visiting my family.

Geneva I know very, very well. It was the closest town of any size to our home, and we frequently went there to shop or eat. Our family doctor's office was just a few blocks from where the roadblock took place. Next door was the drug store where I first discovered comic books. Even closer is the hospital where they set my first broken bone. The place is loaded with memories, good and bad.

McLendon proceeded through Geneva, then turned left onto highway 27. Highway 27 leads directly from Geneva to Chancellor.

Chancellor is on highway 27. The tiny town is only a block wide. A short block, one house deep. My brother's house is on the highway. My parent's house is a block off it.

Fortunately he didn't make it that far. That was the first moment of recognition when I logged on and started reading news reports. Not where it started. Where it ended. The Reliable Metals plant.

It wasn't called that when I lived there, but I remember when the building was put up. It was a big deal, a modern steel industrial building going up in a declining town that had seen better days. I recall that, for some strange reason, there was a golf course built around the building, greens and sand-traps where there are fenced parking lots today. The golf course didn't last long, and the building changed hands, but I still recognized it immediately in the news photos.

It's well out of Geneva on the road to Chancellor, just past the little Geneva airport where my dad got his pilot's licence, where we spent many a happy afternoon watching airplanes when I was young, where my parent's friend Lynda and Jerry once lived in a mobile home behind the tie-down area, and had a German shepard dog.

McLendon was maybe ten minutes at most from my brother's front door when he decided to turn off and make his final play. Seven miles according to Tim. And not any random seven miles. Not any random ten minutes. He was on the right road, going in the right direction. There aren't even any other major roads to turn off on. There was almost literally no other place for him to go.

But thankfully for me, death took a detour, then left the building. Leaving bodies and grief and confusion, and for me, so far away, a disturbance in the Force.

It's a sleepy place that lives mostly in memories for me now, and in the occasional phone call or visit to my parents and brother. How did a gunman get in there? How did mass murder intrude on my past, invade my lazy days of childhood?

Like most people, I study the news reports and try to make some sense of it all. I scan the names of the dead and wonded, and give some thanks that none of them are familiar. Strangers are dead. Good. That's just human nature.

But the odds still eat at me. There are less than 27000 people in Geneva country. Less than 2000 in Samson. Less than 4500 in Geneva. It's almost surprising that I didn't know someone.

And among the dead, some of the surnames are familiar, the same as classmates I went to Coffee Springs School with. It's very likely that I know someone related to those killed. It's that kind of place. Nobody is that far seperated from anyone else, even when one of them is completely across the country.

I almost wish I was there. If I could drive that road and see those places, maybe I could make more sense of it all. But I can't, and I'm left to sort it out from postage-stamp news photos and a lifetime of memories.
Posted by J. Steven York at 9:58 AM