If you haven't seen it already, you can see part one of the article here.

Well, yesterday, just as I was starting to relax a bit, that I had 24 fewer hours to finish my Saturn V model than I planned. So it's been a sprint to get it done in time, but (except for some drying glue) it's done, or as done as it's going to be.

The first couple pictures show the nearly complete rocket. The lower stages are done, though there are still rubber bands holding things on while the glue dries. The interstage (the lower taper) between the second and third stage is missing its final roll-markings, and actually that whole part of the rocket is just dry fitted together, and awaiting final gluing and assembly.

From start to finish this has been a question of compromise, but due to time constraints, I didn't detail it as much as I'd hoped to. It's got none of the external tunnels or rocket housings I'd hoped to add. The service module has only one of its twelve thruster nozzles, I never got around to adding nozzles to the escape rocket, and the engine nozzles were never painted silver (the protective covers for the engine nozzles were nearly an identical shade of red to the cups I used, so this isn't a huge issue).

But also along the way, mistakes were made. The biggest one is that through some error of measuring or calculation, the first stage/second stage joint is way too low. The first stage should be longer than the second. Actually, that could be the problem. I may have measured from the wrong end when I put in the lower second stage wrap. During assembly I kept turning the tube upside down and back again for various parts of the assembly, and that got confusing. 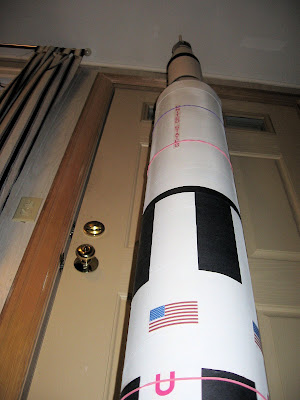 There are other smaller things. One of the flags is a little crooked. There are small gaps and imperfections I wish weren't there. A couple of tank wraps I'd planned to add got skipped for time (and one of the because the first stage was too short, because of my mistake, for it to look right.

Several things about the interstage between the second and third stages are less perfect than I'd like them to be, including a staggered joint in the roll pattern that should be straight.

I kick myself about these things, and yet I know that probably nobody at this party is going to know enough to notice, and there's just not doubt, looking at this thing, despite its flaws, that it's a Saturn V. It has the look, even if the details are wrong.

It also has size going for it. One problem with most Saturn V models, no matter how detailed and accurate they are. They just don't communicate any of the sheer size of the rocket.

The Saturn V was 362 feet tall. That's well over twice the height of the 10 story hotel the party is being held in. Refer to what I call the "shock and awe" low-angle shot of the incomplete model above. The fact that even I (being six-foot six inches tall) still have to look up to see the top of the model (if it's sitting on the floor) makes a huge difference. Put it on a table or pedestal, and it really reminds you that this is a a model of something big.

The details for tomorrow's display are still being worked out, but due to limited ceiling height in the party room, it will likely end up sitting on the floor tomorrow. I really wish there was room for even a short pedestal. Oh, well.

I'm really nervous now that something will happen to the model tomorrow. Parts of it (especially the fins) are fragile, and could be damaged if someone knocks the thing over, kicks it, or moves it without knowing what they're doing. I'm really hoping to get the model back intact after the party.

As I said before, we might be able to donate or loan it to a local school for educational purposes. Failing that, it will probably end up hanging (sideways) from my office ceiling. In fact, since school is out (and due to budget crunch, I don't know how much summer school they're having this year), even if it does go to school, it may have to be stored hanging from my ceiling until fall.

I'll let you know how it goes.