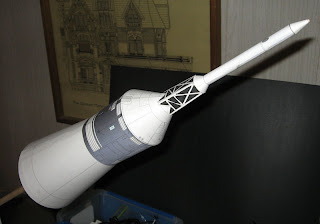 This is a little off the usual topics around here, but... (Actually, given that I've done a lot of posting about space issues, maybe not so much.)

The beach hotel where my wife, Chris works her day-job is celebrating it's 40th anniversary this month. Given that this closely coincides with the 40th anniversary of Apollo 11, the moon landing is one of the major themes for the party. Somehow I got talked into (or did I talk myself into it?) building a model Saturn V moon rocket as a central decoration.

Somehow I got the great idea: We can get one of those cardboard concrete form tubes (used to pour piers and the like) at Lowes and build it around that! It'll be easy and cheap.

Yes, this is being done on a budget of close to nothing. So far I've spent about $30 for materials. No, I'm not being paid for my time. I'm nuts.

Fortunately, there were lots of free resources on the web to draw on, especially for the capsule and escape tower. There are free paper models on the web that you can print out, cut out, and (with only a hobby knife, some glue, and the skills of a brain surgeon) turn into a nice 1/48th scale (just the size I needed) model of an Apollo space vehicle.

Actually, there are rather sketchy models of the whole thing in 1/48th, and better ones in smaller scales. I've ended up using bits of at least four different paper models. But only bits. Mainly the capsule "skin" and the shrouds that connect the stages and cover the four outer engine bells at the bottom. Everything else has been engineered from scratch, scrounging and adapting as I went along.

I needed this thing to be stronger and more durable than a paper model could be, so the entire upper stack, from the upper interstage to the end of the escape tower is supported by a "spine" of wooden dowel. You could put your eye out with the escape tower, but it isn't going to break off.

The interior structure is full of foam-core-board rings and plates, and this material is also used for the fins. All of the black markings are hand-cut bits of black posterboard or craft-board individually glued in place. The engine bells are carefully (we went through three stores measuring to find the right ones) selected plastic cups bolted to a foam-board base-plate. Because the cardboard base tube isn't EXACTLY to scale, and my hand-rolled third-stage tube also wasn't precise, the lower shroud had to be enlarged and modified.

There are well over a hundred (maybe two hundred) parts at this point, and most of them have been designed from scratch, hand-cut, and fitted.

This isn't a museum model though, and it has to be done on a deadline, so like a Hollywood prop, it's a rolling compromise to time and materials. I couldn't find a corrugated material like I wanted to use on the tank wraps, so I had to compromise and use bands of flat poster board.

I may not get around to adding the service module thruster nozzles (twelve tiny cones that would be cut from round toothpicks.)

I may not add many of the service tunnels, ullage (once again, my vocabulary exceeds my spelling checker, a small rocket-motor used to push liquid fuel to the back of the tank of an in-flight vehicle before main-motor ignition and stage seperation motors, and other "bumps" that cover the real Saturn V.

Still, it's nearly 8 feet tall, and even incomplete, the iconic look is there. Get some more paint and a few roll markings on it, and any baby-boomer will know exactly what it is.

I don't know what will happen to it after the party this weekend. Presuming it survives the proceedings (uncertain, but I hope), I hope to get it back. Maybe it can be donated to a local school, or failing that, it could end up hanging from my office ceiling.

In any case, I am very much a child of the space age. Building this is my homage, my totem (in more ways than one) to the anniversary and one of humankind's greatest achievements.

See part two of the article and the finished rocket, here.
Posted by J. Steven York at 6:25 PM